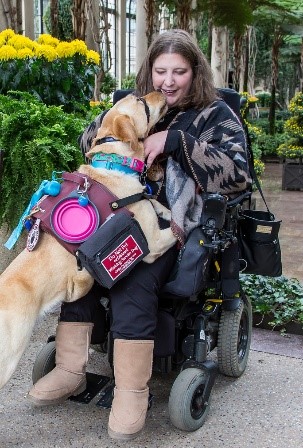 July 11, 2016 was the day that forever changed Abbie’s life. On that day, a Trainer from Canine Partners for Life (CPL) called to tell her she was matched with a service dog named Jiffy. Abbie screamed and cried with pure joy when she received that phone call and remembers telling her Mom, “This is a victory because my life can finally start now!”

Abbie was diagnosed with Cerebral Palsy at just 7 months of age. She doesn’t have use of her legs and has needed a lot of physical help throughout her life. People always had to pick up the items she dropped, she needed help transferring from a wheelchair to a bed, and in fact she needed help with many daily living tasks that most people take for granted. As she got older, because of having limited independence and fear of being alone, she developed chronic depression and anxiety.

Despite the many physical and emotional challenges Abbie faces every day, she is very ambitious and wants to accomplish as much as she can in life. Recognizing though that she needs help, as soon as Abbie graduated from college with a Bachelor’s and Master’s in Communications, she began researching service dogs and Canine Partners for Life was the first organization she found. After reviewing the CPL website and reading the testimonials, she knew it was the right organization for her.

After almost 2 years on the waiting list, Abbie was matched with Jiffy, a beautiful yellow Labrador. Shortly after receiving the life-changing phone call from CPL’s Trainer, Abbie and her parents made the two-and-a-half-hour drive to CPL so Abbie could meet Jiffy. Abbie was emotional during the entire drive and could not contain her excitement. She says she fell in love with Jiffy in less than a millisecond. Jiffy came right to her, laid down, and they spent a couple hours just cuddling with each other. Abbie says, “I knew it was the start of a very exciting chapter. I knew she was going to be a gift from God.”

Fast forward three years, Abbie and Jiffy are an incredible team! Jiffy retrieves everything Abbie drops, she opens and closes doors, she assists with transfers, helps Abbie get dressed, pushes Abbie’s wheelchair footplate up and down, and so much more. Jiffy has changed Abbie’s life so tremendously that the two moved out on their own earlier this year! To prepare for the big move, Abbie taught Jiffy how to help with clothes on her lower extremities so she can use the restroom without assistance and Jiffy also learned how to pull the bed sheets up and down to help Abbie in and out of bed. Abbie says, “I wouldn’t be doing this if Jiffy wasn’t in my life because it wouldn’t be possible. I thought I knew what love was, but I truly had no idea how unbreakable, how deep our bond would become. I’m never alone anymore so the fear of tackling these big transitions doesn’t bother me as much, because Jiffy is always by my side.”