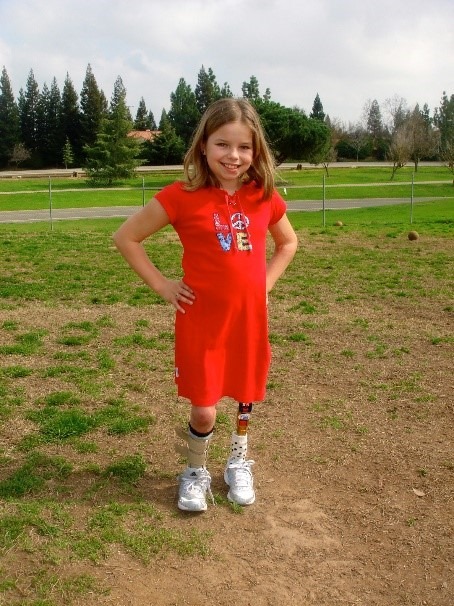 The holidays are a time for family, togetherness and reflection. Nineteen years ago this December, the McKeon family made the decision to adopt Megan, a severely burned 5-month-old baby girl. Megan would experience a lifetime of surgeries, stares and questions. Would you consider making a significant gift today to help burn survivors like Megan find a sense of belonging and self-acceptance?

It was December 24, 2000, as Susan McKeon and her family sat on the pews during a religious service in Rega, Latvia. Susan’s husband Mark was on a work assignment with the Department of Justice in Latvia, and Susan was there with their two children working as a nurse for the American Embassy. In Susan’s pocket was a folded up magazine article about a 5-month old baby girl whose mother had dropped a cigarette into the baby’s crib and passed out drunk, unable to hear, much less tend to, the baby’s cries. The article was a plea for a family to adopt the abandoned child. A voice in Susan’s head kept asking her, “What about that baby?”

The next day, Susan and Mark went to the children’s hospital to visit the girl. As soon as Mark laid eyes on the baby, with second- and fourth-degree burns covering her tiny body, with and one amputated leg and the other severely deformed, he turned to Susan and said, “This is our daughter.” “I know,” she replied.

Adopting a baby in Latvia was no easy task and the process typically took 2 to 3 years. Thankfully, with the help of the Latvian press and with this baby’s dire circumstances, little girl Vladislava Ceremniha officially became Megan McKeon in July 2001. Immediately after the adoption, the McKeon family moved back to the U.S. to get Megan the proper care that she needed.

Megan had undergone 23 surgeries, survived sepsis and underwent a number of skin transplant operations in Latvia, a majority of which were done without anesthesia. She traveled between the U.S. to the Netherlands, where Mark was on another assignment. Her memories begin with a childhood in the Netherlands, feeling alone and isolated most of the time. She felt like she was the only burn survivor and amputee in the country, and never felt like it was really her home.

At age six, Megan and her family moved to Clovis, CA where she started first grade. Megan recalls elementary school as one of the roughest times in her life. She was bullied and made fun of, and as a defense mechanism, Megan became a bully herself. She did not have a lot of friends and never felt accepted. Megan experienced a lot of self-hatred in elementary school and just wanted to be “normal.”
Megan’s family tried to immerse her in “normal” childhood activities like the Girl Scouts. When Megan was about seven years-old, she volunteered for a holiday party with her Girl Scout troop, not knowing that the holiday party was for burn survivors and hosted by the Alisa Ann Ruch Burn Foundation (AARBF). Megan’s mother connected with AARBF to learn about ways that Megan could get involved.

The first AARBF event that Megan participated in was the Monterey Bay Aquarium Sleepover trip. This was the first time that she had really met or interacted with other burn survivors, and the first time that Megan felt a sense of belonging. She felt so welcomed and no longer felt like an outcast. Megan continued to participate in AARBF recreational events and outings including Champ Camp, Central Coast Beach Adventure, Outdoor Trip, Young Adult Summit and the Southern/Central California Ski Trip.

“My favorite part about Champ Camp, and all of AARBF’s events, is having a sense of belonging; being part of a family. You don’t get looks, stares and unwanted comments with AARBF,” said Megan.

Tragically, during Megan’s junior year in high school, her mother Susan was diagnosed with brain cancer and died after a short four-month battle. Susan was Megan’s best friend and her greatest cheerleader. Megan fell into a deep depression and became suicidal. She began drinking and experimented with drugs. With support from her family, Meagan was able to get sober and started therapy.

Megan has had a total of 38 surgeries and has outgrown dozens of wheelchairs, prosthetic legs and crutches over her lifetime. Megan’s burn injury stunted her growth and she stands at merely 4’ 7”. The loss of her leg, the bullying and the tragic death of her mother have all been great challenges for Megan, but she is a survivor and continues to move forward with her life.

Megan believes that her life’s work is to help people achieve self-acceptance, something that she has worked on and will continue to work on her entire life. In 2018, Megan was able to graduate high school and became a Counselor-inTraining for Champ Camp. Megan is currently enrolled in community college where she is studying early childhood education. She hopes to graduate in Spring 2020 and earn her teaching certificate. Megan would ultimately like to become a preschool teacher so that she can teach children at a very young age about acceptance of others.

The road to recovery for a burn survivor is non-linear, and includes many highs and lows along the way. The road is often isolating and lonely, with much self-pity and self-doubt, but the Alisa Ann Ruch Burn Foundation is here to provide a supportive, caring and empowering community for those affected by burn injuries. Please consider making a meaningful gift, of any amount, to help those affected by burn injuries find a loving and supportive community with the Alisa Ann Ruch Burn Foundation. Thank you for helping us continue to enhance the quality of life of those affected by burn-injuries with your support this holiday season.