No Longer Bibleless: The Joy of the Huaylas Quechua People 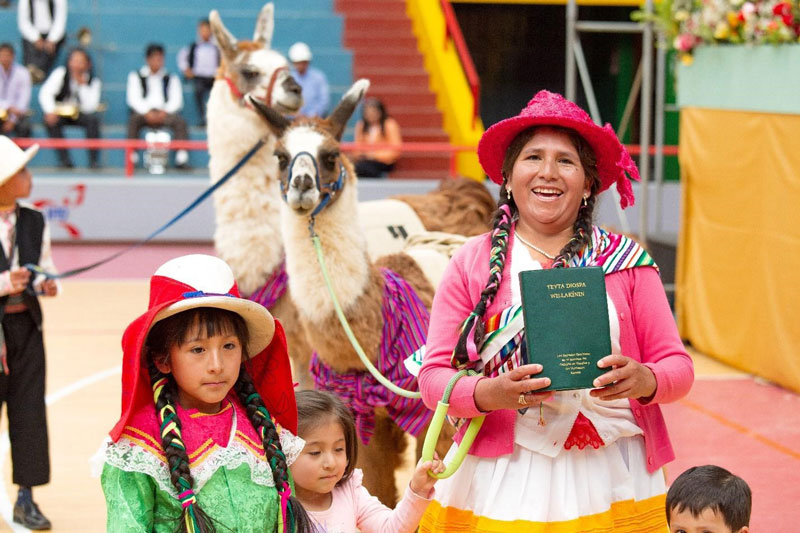 People clapped their hands to the beat of the marching band as they streamed through the mountain city of Huaraz, Peru. As hymns like “When the Roll is Called Up Yonder” played, little tongues licked ice cream cones, families held hands and mothers carried babies in tied blankets on their backs. One 70-year-old woman raised her hands, a Bible clutched in one of them, for the entire two‑mile parade.

The women’s ministry of a local organization called Alli Willaqui (AWI) led the crowd through the city streets and proudly held a banner with the words of Isaiah 40:8: “The grass withers and the flowers fade, but the word of our God stands forever” (NLT). This was a day to celebrate something new and eternal: the complete Word of God in the Huaylas Quechua language.

Soon the parade arrived at the city’s coliseum. Two thousand attendees from several churches and denominations took their seats inside for the main event: the dedication of the complete Bible. The four-hour celebration included Bible readings, musical presentations and preaching.

Two llamas entered the auditorium with boxes of the newly printed Huaylas Quechua Bibles on their backs. The crowd fell silent, and the program’s emcees were emotional as the boxes were opened on stage and the Bibles were removed. Then applause broke out as the people on stage held the Bibles high in the air.

Kushi kushi kome was a phrase repeated often by people throughout the day. It means, “I’m so happy.” The musical groups who performed at the dedication played lively, high-pitched melodies on pan flutes, harps, trumpets and guitars. A woman named Nancy led the attendees in song alongside other women from AWI.

After the program, Nancy’s eyes filled with tears as she shared, “My grandparents were the ones who shared the gospel with me, and all four were believers. But they’re with the Lord now.” Nancy’s grandparents loved God and embraced the Good News but never got to hold the Huaylas Quechua Bible in their hands. “Today I’m celebrating their legacy,” Nancy said. “Thank you for sharing in our joy!”

The next morning at a church in a mountain village, Huaylas Quechua families filed inside and sat on wooden pews — women on one side of the aisle, men on the other. The walls of the church were painted with Scriptures. A woman and her daughter brought fresh flowers and presented them at the altar. Young children bounced into the aisle and moved around throughout the worship songs and sermon.

And together the church, no longer Bibleless, read Psalm 16: “You will show me the way of life, granting me the joy of your presence and the pleasures of living with you forever” (Psalm 16:11, NLT).

Wycliffe is grateful to partners who support the work of Bible translation through the CFC and/or through prayer.