Rhythm and Me: The Power of an Arts Education for Students with Autism Spectrum Disorder 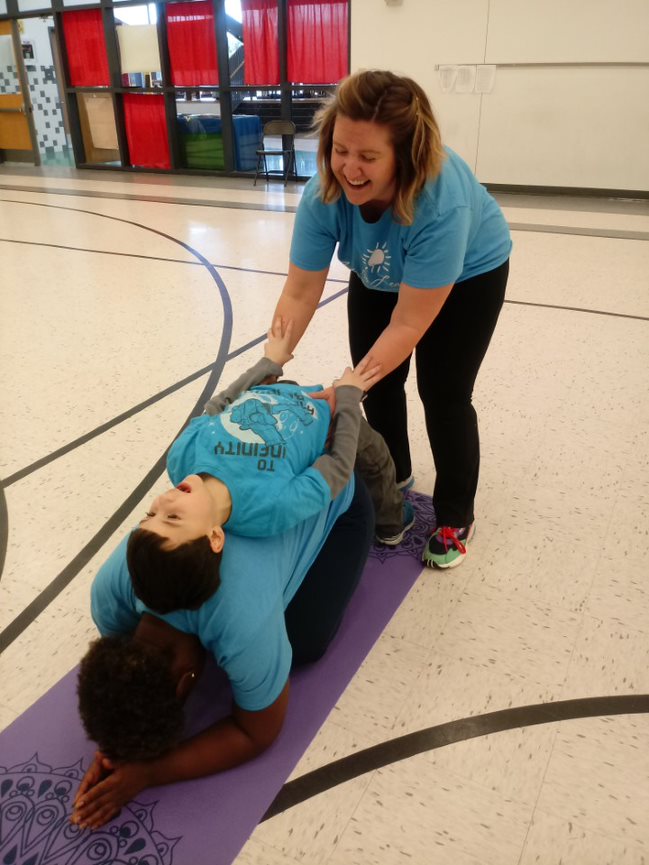 February 2020
Sometimes a single moment can illustrate the power of an Arts for Learning Virginia program.

That was the case at Rhythm and Me, an adaptive dance residency that connects students living with and without Autism Spectrum Disorder (ASD). Students from throughout Portsmouth Public Schools in Virginia are transported to a centrally-located elementary school twice a week to learn the basics of dance and movement, with a focus on key health concerns associated with ASD, including non-verbal communication.

Arts for Learning teaching artists Jasmine Marshall and Natasha Leshanski have been working with a group of students since early February. Natasha, who leads the yoga portion of the program, says it’s the “very opposite” of typical classroom learning, where students are expected to be self-contained as they lean over desks and aren’t free to move around. In Rhythm and Me, students exercise, stretch out, and open their bodies, Natasha says it’s also “helping them feel less vulnerable about opening up emotionally by literally using their whole body.” That process may be more challenging for students living with ASD who can feel uncomfortable with certain types of movement or with touching or being touched.

In the early weeks of the program, Natasha had been encouraging students to create more independent yoga poses, but it wasn’t quite working. She introduced the concept of partner poses, including one called “lizard on a rock,” with the person on the bottom kneeling in a child’s pose and the person on the top leaning back and extending their arms to the ground.

A second-grader named Seth was fascinated. Natasha says he’s often not interested in certain activities and will choose to run laps around the classroom instead. This time, though, was different. With Jasmine stretched out in the child’s pose, Seth climbed on her back as the “lizard” and Natasha supported him as he balanced himself. He then tried out the post with other students, connecting with them in a brand new way.

“It was the first time Seth had relinquished control over his body, so when he was laying across his classmate’s back, he even was able to draw his arms up and get that full stretch. When you think about it, that’s probably the most vulnerable position you can be in,” Natasha says. “He let himself go all the way in a classroom full with people he doesn’t know very well, and so I felt like it was really a breakthrough with his comfort level with all of that.”

The goal of Rhythm and Me, Natasha says, isn’t the perfect downward dog or the precise execution of partner poses.

“We want the kids to feel confident, we want them to be moving their bodies, and we want them to enjoy themselves. So everything else takes a back seat to those. As long as they’re willing to put themselves out there, it’s success, day after day.”